This Wednesday Sarasota County Supervisor of Elections Ron Turner was in the studio with us to analyze the November election results. We also talked about the implementation of Amendment 4 which restores the right to vote to so many Floridians.

By the way, Ron will also be at the CONA (Council of Neighborhood Association) meeting January 14.

Then we talked to our old friend Joe Newman. Joe will be 106 in early January! Joe discussed the book he’s reading – The Good Society: The Humane Agenda by John Kenneth Galbraith.

(Here this and other past shows at wslr.org/shows/peace-justice-report/ )

Here’s something Carrie Seidman wrote about Joe in the Sarasota Herald-Tribune last year:

“If I am not doing something, I might as well die,” Joe Newman says.

Next week — Jan. 13 to be exact — Joe Newman will be 105 years old. He still gets around without a walker or cane. He drives a sporty Mercedes, though not at night. There is plenty of hair left on his head. And when he gives a visitor a hug, it is with a fierceness, strength and sincerity that would put a man decades younger to shame.

There are probably any number of reasons Newman has outlived everyone in his lineage. He has never smoked, doesn’t drink and his food and exercise regimes are sensible, though not extreme. More likely, the biggest contribution has been something less tangible.

Newman has never stopped trying to make a difference in the world.

“If I am not doing something, I might as well die,” says Newman, dapperly dressed in a cranberry button-down shirt and a white cardigan. “I remember visiting my mother and she would always say, ‘Joe, what have you been doing?’ And when I told her she’d say, “Well, and what are you going to do tomorrow? ‘We’ — it was always we, not I — ‘only have so much time. Are you rowing or are you just sitting in the boat?’”

Newman’s parents met in a gulag in Siberia, political prisoners of the Czar. His father was “a revolutionist,” his mother “an evolutionist.” He calls himself “a born Socialist,” though his father’s business and his own, as an accountant, were firmly capitalistic.

He grew up in South Bend, Indiana, not poor, he says — “we just didn’t have any money.” There were, of course, no cars, few paved roads and no radio or television. Fun was nailing two roller skate wheels on a two-by-four to make a scooter. He had a much older brother who fought in World War I, a decade-older sister who helped raise him (both from his mother’s first marriage) and a full (“though I never made that distinction”) brother two years older. They have all been gone for years.

As a teen, he thought of becoming an architect, but when the required mechanical drawing class was full, he took bookkeeping instead. That became “one of the little things that can change the course of your life.”

Another detour was the birth of his only child, Rita Jo, who was severely impaired in the birthing process. Before Newman had a chance to take the CPA exam, his wife, Sophie, had formed an organization and appointed him president, setting the scene for him to become the “voice of the movement” for the mentally handicapped in Indiana for many decades.

In 1950 the couple founded the Logan School for Retarded Children, which today (as the Logan Center (watch the great video hereI )serves hundreds of adults and children with intellectual disabilities. (An annual “Newmanfest” is the major fundraiser.) But Newman considers that just his “second greatest” legacy. The first was creating an organization to assume guardianship of disabled children who are predeceased by their parents.

“It was our chance to move it forward,” he says. “You begin to realize the import of what you’re doing and you look in the mirror and say, ‘You can’t stop.’ You couldn’t live with yourself otherwise.”

Rita Jo died at 28; just 12 years later, Sophie was gone too. Newman, who had several tax clients in Florida, moved to Sarasota in 1990 and, after another relationship to a woman who died of Alzheimer’s, met his current partner. Anita Sampson is 97, twice widowed and just as astute and politically savvy. They moved in together after his 100th birthday.

Though he retired from accounting, Newman’s activism never ceased. In Sarasota he became a member of the Socrates Café, the board of Newtown Alive, and served as leader of a liberal discussion group focused on topics raised by the magazine The Nation. (He enjoys the latter because “The Socrates is just talk; the Nation is ‘What can we do?’”) In 2014, he launched a write-in campaign for the District 16 seat long occupied by Rep. Vern Buchanan. His age — 101 at the time — got the most attention, but his intentions were anything but self-glorifying.

“I believe in socialism as a philosophical way of living,” he says. “The older I get, the more confirmed I am: It’s not a world of I’s, it has to be a world of we’s. Any legislator should ask first, will this benefit society?”

His other mission is convincing people that mental exercise is as important as the physical.

“What does make me feel good is people saying, you are an inspiration,” he says. “If I am helping them lose a fear of getting old and not being able to be a part of things, I’m happy. As long as I can, I need to show up and do it.”

There isn’t much left on his bucket list, though he saw a hot air balloon once and still thinks a ride sounds like something he’d enjoy. But bigger issues remain his daily prod. Like how we could put the many technological advances that have occurred during his lifetime to better use for the benefit of mankind. Or how to rectify a social inequity that leaves him worrying about which children “will have good luck in the draw.” Or why we don’t accept “there is no such thing as a normal society unless it has abnormal people in it.”

“I’m an anthropological progressive. By nature, progress is inevitable,” he says. “We’re screwing it up, but the potential is there. If we can have legislators who look at the potential of people we may get somewhere.”

Oh, and there is one more thing that keeps him motivated.

“We have a family plot in Indiana,” he says. “My mother, my father, my brother Leo, Rita Jo and Sophie are all there. And they may not let me in if I don’t get the job done.”

WSLR Board Meets on Monday 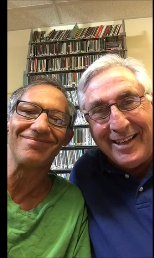