Here is a neat description of how The Dead came to be at the milk Weg, from:
https://dailydoseofdead.wordpress.com/2015/10/16/today-in-grateful-dead-history-october-16-1981-club
-melk-weg-amsterdam-netherlands/

“Played on borrowed instruments in a hash bar in Amsterdam on Bob Weir’s birthday, with an opening
acoustic set and an electric second set featuring several rarities and the return of a beloved classic, this
is one of the most exciting and free wheelin’ Dead shows in the cannon.

How did the Grateful Dead end up playing two nights (October 15th being the other one) in a club with
a capacity of approximately 500 people when they were selling out much larger venues all across
western Europe on this fall tour? Apparently it came down to the weather. The Dead were supposed to
have played two shows in the south of France after their October 13th concert in West Germany, but
those gigs were cancelled due to inclement weather. Instead of sitting around for four days until their
next scheduled show in Paris on the 17th, the band decided to go to Amsterdam and play there. But the
road crew refused to haul the band’s equipment to the Netherlands, so the Dead had to use what they
found at the club while the roadies went ahead and set up the show in Paris. The show on the 15th was
pretty cool, but it was just a warm up act for this one.” 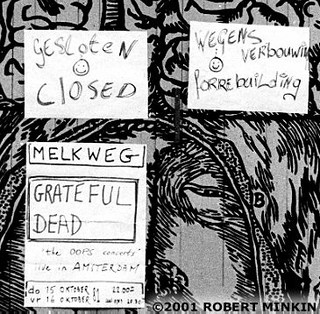 This is a short but great show. Enjoy!

No reviews, surprisingly, on the matrix recording; these are from the soundboard source:
REVIEW: Awesome show
Definately check out this classic. One of my first tapes ever, this show is just great. Good sound quality,
amazing setlist and the band just seems to be feeling good (Bob Weir’s 34th B-Day). The Lovelight and
Gloria hadn’t been pulled out in a super long time and this is the only “Hully Gully”. Probably my
favorite show of ’81.

REVIEW: best of ’81
This show surpasses most of the ’81 shows. Both the acoustic and electric sets are top notch. It’s nice to
finally have a soundboard source, even though the well-circulated audience recording is very nice
sounding. This is in my Dead top 10 shows of all time.

REVIEW: What a great walk down memory lane
I got a great copy of this in the fall of ’82 from some guys I knew at Lafayette College and relished this
for a long time. On listening to this again cannot believe how hot this is and sadly this was the last time
they played the Radio City and Warfield material acoustically. Oh babe it aint no lie, on the road again,
bird song, all great. The second set was great for alot of reasons that was the one and only (Iam aware of)
hully gully, first lovelight in close to 10 years and the whole back end of this just rips…. Top 10 for
novelty alone… When was the last time you heard a show like this while you ordered a few grams of
black afghan hash to smoke at your table?

REVIEW: The Bob B-Day Show: Melk Weg ’81
A famous fun show, certainly not highest on the list for pure musical chops, but just one of “those”
nights. Borrowed instruments, an acoustic set, Bob’s birthday, last Ripple until ’88, only Hully Gully, 1st
Gloria since ’65, and a club show. A fun little window in time for what surely must have been a great
little night in the Netherlands. 3 1/2 stars for performance, but 4 stars for sheer enthusiasm.

REVIEW: Melk Weg
This sounds excellent. I had this tape for years and I am completely thrilled to hear this again. As with
all of these shows, judge for yourself. If there is some other source that sounds better I would love to
hear it. In any event, I am good with this.

REVIEW: Spontaneity is the key
Garcia and the band seemed fully engaged in making fun,interesting music during this show. I am a huge
fan of 1981 shows but there are times during the European runs when they sound bored because the
touring and song selection became too standardized. This band made its name by taking big risks and
this show is evidence that taking risks can bring BIG rewards.

REVIEW: Loose, fun show
Could that second set be any more fun? One good dance tune after another. It lost its fifth star due to the
patchy sound.

REVIEW: Fantastic Upgrade!
I have an old tape of this show. I recall it was recorded very speedy, or very slow. distorted nonetheless.
The whole thing reminds me of a soundcheck. Unlike a soundcheck, there is no stopping to shout out
chords C minor,D, C minor, E ! then picking up where you left off. Its a performance! The fact that they
were playing with borrowed equipment seems to make it more challenging for the boys, and thus they
sound like they are having good ‘ol fashoned Grateful Dead fun. The intimate setting comes through
quite clear. Imagin the Grateful Dead playing in your local club in the 1980s! WOW! Five-Five Stars!

REVIEW: Good one
Some people have commented that the sound wasn’t that good and have marked it down on that accord.
The sound is perfectly fine, there is some slight tape noise, but compared to many other shows that I
have gotten from here there is no problem. You can hear every instrument and voice perfectly fine. What
we got here is a high energy show with an accoustic set. Not the best version of any of the songs that was
ever played, but you can say that about well over 2,000 other shows as well. Great set list with a number
of songs that you don’t hear them doing every day. I would rate this 9 out of ten, I’ll round it up since the
average rating here is 4 out of 5.

REVIEW: this show is…
pretty good and fun to listen to because its kind of a rare occurence in 81, and here are some pics, bob
minkins site, the guy who did some art for the dead on dicks picks.

REVIEW: First Weir Lovelight?
Not sure, but is this the first Turn on Your Lovelight since the Pigpen heydays? I can’t find another in
between. No one seemed to notice this. hmmmmm…..

REVIEW: Hell of a Show for..
A canceled date in South France and a makeshift reschedule in The “Milky Way” club in Amsterdam.
That city brings out the best in everyone… On borrowed instruments, you can tell that acoustic is too
bright for Jerry’s taste to be his, and what a LOVELIGHT rebirth. Bob Has some big shoes to fill there,
but I’m sure Europe brings back memories of Pig for the guys. It shows how great these guys are as a
musical group to pull something together and pass with flying colors. Tape has some issues, but super
fun listen!!!!

REVIEW: bread crumb
I had a tape of parts of this show shortly after it was played. Still do, somewhere. The novelty was the
Lovelight, the first in almost a decade. From here on, Bobby gradually grew comfortable with fronting it,
but it took some time. Also of note are Gloria and Hully Gully. I wonder if the borrowed instruments just
spoke to them.